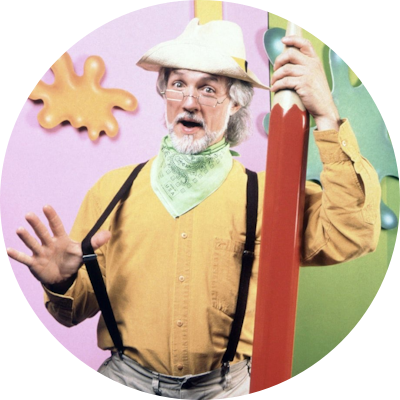 A bit about PappyLand
Pappy Drewitt (portrayed by Michael Cariglio) is an artist and host of the series who loves to draw, He was dressed in a hat, suspenders, glasses, a green bandana, yellow shirt, and khaki pants; similar to the appearance of a forty-niner. The theme song suggests that he created Pappyland; although the season 5 episode "Grandpappy's Day for Drawing", which aired in 1997, suggests that Pappy's father or possibly Grandfather, Grandpappy Drewitt who was also played by Cariglio created Pappyland rather than Pappy himself. He lives in Pappyland and has many friends who live there. A running gag in the series was that whenever he coloured the picture he drew earlier in the episode, he would break one of his crayons. This was done so Pappy could teach kids that you don't have to throw away a crayon just because it breaks. On occasion, when he colored in the picture, he also went outside the lines, thus teaching kids that it's all right to go outside the lines when coloring. In the original VHS, he was portrayed as a hillbilly. To get to various places in Pappyland, Pappy makes use of different modes of transportation like the Pappy Pad Express, the Much More Door, the Wishing Wheel, the Pappyscope, and the Color Copter.

How Art Saved My Life With Michael Cariglio